When I bought this url and started posting I was traveling the world as an itinerant raft guide and ski bum.  I think most people liked the posts much more, not to mention the internet was kind of a “new thing” back then.  Now, I pretty much just post about Real Estate and I’ve noticed that not a lot of people read my posts.  So, here’s a change, a few things I’ve done lately….

I traveled up to Oakridge to ride the Alpine Trail.  Some of my good friends from years of adventuring had been recommending the Alpine Trail and Oakridge mountain biking for years and years, since I moved to Oregon.  I finally made it and have to agree, it was spectacular!

I used Cog Wild shuttle service.  They did a great job! 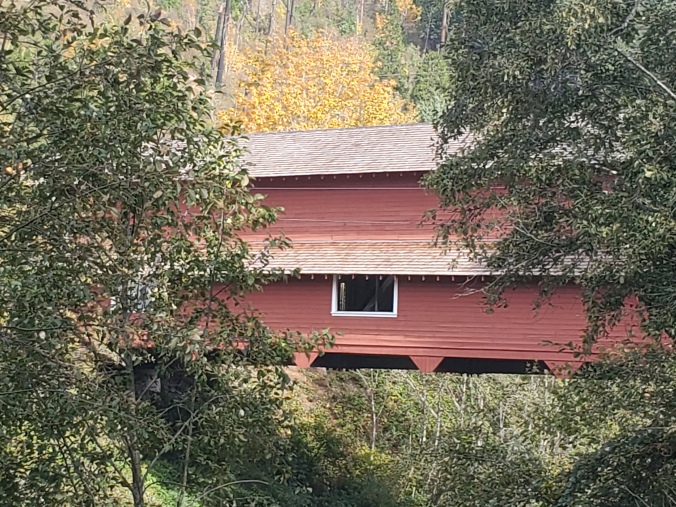 Cool covered bridge in Westfir where the Alpine Trail ends.

This was the highlight of the fall season for me.  I was extremely fortunate to join up with a bunch of really rad riders from Eugene in the shuttle van.  They were so kind to let me tag along to their group and we had such a blast whizzing through the old growth forests, through the mud and the meadows, pedaling and coasting through one of Oregon’s prettiest places.

If you stuck it out and read this far here’s a reward of sorts for anyone considering this quintessential absolute classic of a ride.  If you don’t geek out and watch a bunch of YouTubes, which I did not, this ride will surprise you.  I was in what I would rate as B to B+ fitness for me.  Meaning I had been climbing several thousand feet on Mt. Ashland anywhere from 2 to 4 times per week for 5 or 6 weeks.  I thought that because this ride involved a long shuttle ride up that it would be a pretty breezy easy descent without a lot of fitness required.  I was absolutely shocked!  It’s a hard ride if you are not an absolute animal.  Bring plenty of water and food.  We had cramping and discomfort in our group including myself.  It didn’t take away from the ride, but I definitely wasn’t prepared for the physical difficulty of this ride.  We were joking amongst ourselves that if one of these guys that has ridden the Alpine Trail several times had asked me in the parking lot what I thought the physical fitness difficulty of the ride was going to be I would have said a 4 on a scale of 1 to 10.  It was an 8 at least.  We did climb to the true summit and ride the whole trail, you could cut that top climb out and if you got super depleted cut off some more singletrack on the access road, but I think most folks would be happier just going with a bit more fitness and knowing they did the “real” ride.  Best wishes friends!